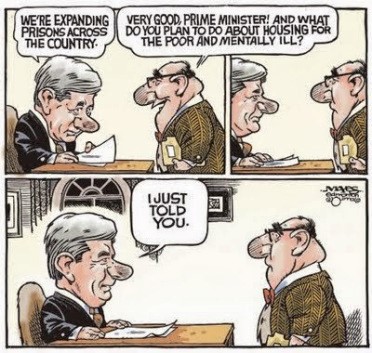 One TOP party policy that hasn’t received much attention in the run up to the election is Gareth Morgan’s wish to reduce the prison population. He argues that rather than rehabilitating inmates, “prisons nurture crime”.

The Corrections Department’s own figures confirm the fundamental ineffectiveness of their rehabilitation programmes. This means that prisons don’t keep us safe either because these unrehabilitated prisoners are almost all released eventually. And prisons are incredibly expensive chewing up billions of hard earned taxpayer dollars that you could be used to fund more teachers, doctors, social workers and infrastructure.

Morgan: Garth we need to reduce the prison population by 50%. We need the money that Corrections spends on locking up prison inmates for other things like housing the homeless, treating drug addiction and improving mental health services in the community

McVicar: No, you’ve got it all wrong, Gareth. That’s what the prisons are for – to provide shelter for the homeless and take care of people with addictions and mental health problems. We need to put more of these losers in prison and get them off the streets.

Morgan: Yeah but that doesn’t solve the problem, does it? These guys don’t get any help in prison and eventually they get released on parole or at the end of their sentence. So, at the end of the day we’re no better off.

McVicar: That’s easily fixed Gareth. First, we need to abolish parole so these scum serve their whole sentence. We have to stop letting them out early. Second, we need to impose much longer sentences so hopefully these crims just die in prison. After all, life should mean life – not three years then out on parole after one year.

Morgan: But only 0.01% of prisoners have killed someone, you know, committed murder.  We can’t lock up robbers, shoplifters, drug addicts and drink drivers for life. Sentencing has to be proportionate – you know what I mean – the punishment should fit the crime. And they need help with their addictions.

McVicar: That left-wing claptrap is all well and good – but we have to lock these crims up for a long time to deter other people from drinking and stealing our stuff – otherwise everyone will be doing it.

Morgan: But the academics say that this so-called theory of deterrence doesn’t really work – because most crims are mentally ill, brain damaged or addicted to alcohol or crack. They mostly commit crimes when they’re high as kites or drunk as skunks or to feed their addiction and the possibility of going to prison doesn’t even dawn on them.

McVicar: Don’t talk to me about academics. They’re the ones that got us into this mess by claiming that crime is the result of childhood abuse and dysfunctional parenting. It’s got nothing to do with parenting. My parents beat the crap out of me and look how I turned out. I don’t need an academic to tell me right from wrong. Crime is a personal choice made by people with no moral fibre.  Bugger this namby pamby approach, we need to use more corporal punishment on our children – that’s what turns them into real men.

Morgan: But it’s not just men Garth. There’s more and more women going to prison now as well. The vast majority of them have been sexually abused as children and because they’re psychologically damaged, they team up with abusive partners who beat the crap out of them.

McVicar: Well if you choose an abusive partner, you’re deliberately choosing to get beaten up. So, getting beaten up is a personal choice – just like crime. We have to take responsibility for our lives and stop blaming everyone else for our problems. The middle-class intellectuals have been coddling crims for way too long.

Morgan: But we can’t keep locking up more and more people Garth. Prisons are expensive. The prison population is at an all-time high. We’ve got 10,000 inmates. It costs $100,000 a year to lock up just one inmate and National wants to build another prison. When’s it going to stop?

McVicar: It’ll stop when the perverts are all locked up and the streets are safe to live in again…

Morgan: What do you mean? New Zealand is the second safest country in the world.

McVicar: That’s what I’m saying – locking up the bad guys is the only thing that works. Prisons create peace and harmony in society.

Morgan: (after a long pause with a look of bewilderment on his face) Yeah right!