In March 2018, Garth McVicar congratulated the police on his Facebook page for shooting a 29-year-old man near Pohuehue. “One less to clog the prisons!” he wrote.

McVicar was criticised by all and sundry including the police who called his comments repugnant. Action Station urged readers to sign a petition suggesting ‘Sensible Sentencing Trust should not have charitable status’.

The reality is that the SST does not have charitable status. It was deregistered in 2010 when the Charities Commission decided it was a lobby group and that its main aims were political rather than charitable.  The point was clarified in a press release issued by Charities Services in 2015:

The Sensible Sentencing Trust was created to advocate for changes in the law about sentencing and criminal (penal) policy. It is not a registered charity.

According to Sir Peter Gluckman, Garth McVicar uses dogma, rather than data to make his case in the media.  It seems he also uses ‘alternative facts’ (to quote Kellyanne Conway).  On the SST website, McVicar still claims the SST is a ‘registered charitable trust’ (see screengrab below). 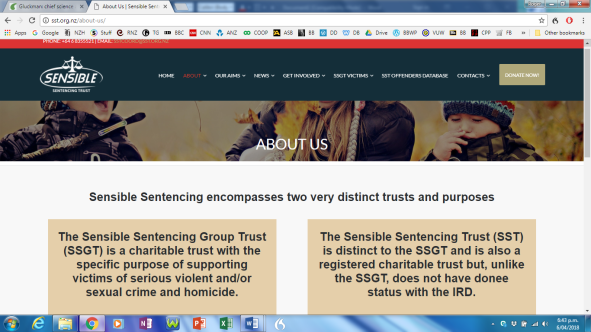 This is illegal under the Charities Act. Section 37 of the Act states that unless registered under the Act, “a person may not use the words ‘registered charitable entity’ to describe their organisation”. Section 38 says that anyone who does so commits an offence and is liable to be fined up to $30,000. That means McVicar is potentially in breach of section 37 of the Charities Act and could be fined up to $30,000.SGRITY SET UP

In order to get around the deregistration, in 2015 McVicar set up a second trust called the Sensible Sentencing Group Trust. The website claims:

However, Garth McVicar is the spokesperson for both organisations: the roles and functions of the two trusts are enmeshed on one website; funds for the SSGT are solicited on the SST site; the few staff who offer victim assistance on behalf of the SSGT are all members of the SST; and the SSGT Trust document (available on line) in effect describes political advocacy in its mission statement. It says:

“We serve to educate the public as to the plight of these victims… and to help them ensure their interests are properly understood by any relevant authority.”

‘Educating the public’ (through McVicar’s frequent media statements) and ‘ensuring that victims’ interests are understood by the relevant authorities’ is McVicar’s modus operandi. He is constantly calling on the Government of the day to lock up more people. According to Charities Services, as a registered charity, the SSGT is not allowed to do this.

In other words, the SSGT is just a front enabling the organisation to continue offering donee status with the IRD while McVicar continues with his media campaign and political agenda under the guise of the SST.  Political advocacy is not a charitable purpose. So in the words of the Charities Service, both the SST and SSGT appear to be “sham charities set up for an illegal or improper purpose”.

The SSGT should also be deregistered. Now that would be really sensible.

2 thoughts on “Garth McVicar commits a $30,000 finable offence every day”